Made in Britain: 82 Painters of the 21st Century 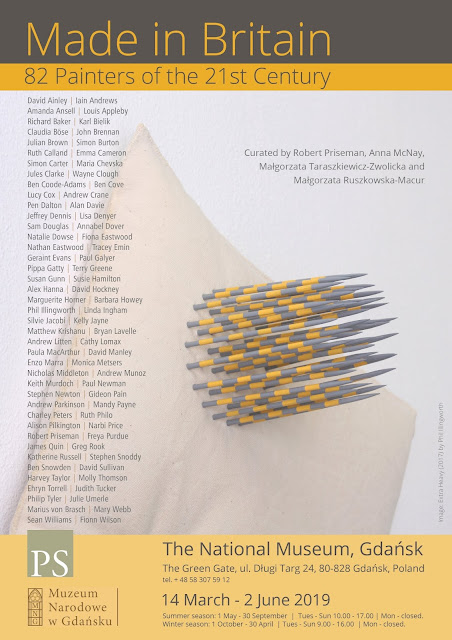 Proud to be showing my work next year at The National Gallery of Poland, Gdansk, in an exhibition entitled 'Made in Britain: 82 Painters of the 21st Century'. My family roots are in Poland so, for me, it is very appropriate.

The exhibition, which is the first British painting exhibition in the country for forty years, features a selection of work from the Priseman Seabrook collection. It runs from 14 March - 2 June 2019.  The opening reception is on Thursday 14th March at 6pm.

A panel discussion will take place at 10am at the Gdansk Academy of Fine Arts on Friday 15th March, and there will be a finishing event on the 2nd June.

The show itself will take place over three floors at The Green Gate, which is one of the main tourist attractions in Gdansk.

I am sure there will be many installation views and photographs of 'Made in Britain' which I will post here when the exhibition opens. Watch this space!

'Made in Britain: 82 Painters of the 21st Century' is curated by Robert Priseman, Anna McNay, Malgorzata Taraszkiewica-Kwolicka and Malgorzata Ruszkowska-Macur.

Julie Umerle
LONDON, United Kingdom
Julie Umerle is a contemporary abstract painter who lives and works in London. For further information, and to see her work, please visit her website: www.julieumerle.com